After reading this chapter, you be able to:

How do we de-identify information? Easy - we just remove the columns that contain identifying information!

We’ll save some of the identifying information for later, when we’ll use it as auxiliary data to perform a re-identification attack.

Imagine we want to determine the income of a friend from our de-identified data. Names have been removed, but we happen to know some auxiliary information about our friend. Our friend’s name is Karrie Trusslove, and we know Karrie’s date of birth and zip code.

Indeed, there is only one row that matches. We have used auxiliary data to re-identify an individual in a de-identified dataset, and we’re able to infer that Karrie’s income is less than $50k.

How Hard is it to Re-Identify Karrie?¶

This scenario is made up, but linking attacks are surprisingly easy to perform in practice. How easy? It turns out that in many cases, just one data point is sufficient to pinpoint a row!

So ZIP code is sufficient by itself to allow us to re-identify Karrie. What about date of birth?

This time, there are three rows returned - and we don’t know which one is the real Karrie. But we’ve still learned a lot!

How hard is it to re-identify others in the dataset? Is Karrie especially easy or especially difficult to re-identify? A good way to guage the effectiveness of this type of attack is to look at how “selective” certain pieces of data are - how good they are at narrowing down the set of potential rows which may belong to the target individual. For example, is it common for birthdates to occur more than once? 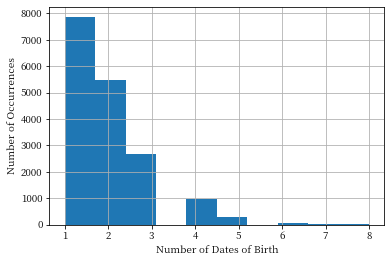 We can do the same thing with ZIP codes, and the results are even worse - ZIP code happens to be very selective in this dataset. Nearly all the ZIP codes occur only once. 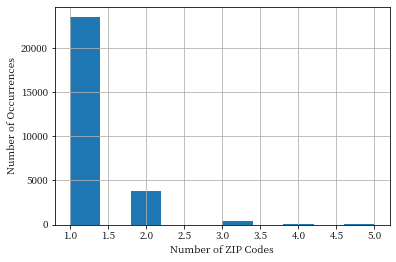 How Many People can we Re-Identify?¶ 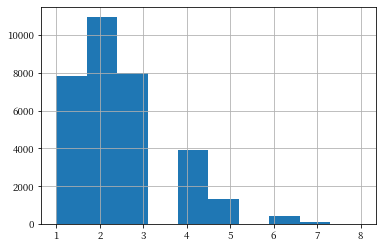 When we use both pieces of information, we can re-identify essentially everyone. This is a surprising result, since we generally assume that many people share the same birthday, and many people live in the same ZIP code. It turns out that the combination of these factors is extremely selective. According to Latanya Sweeney’s work [1], 87% of people in the US can be uniquely re-identified by the combination of date of birth, gender, and ZIP code.

Let’s just check that we’ve actually re-identified everyone, by printing out the number of possible data records for each identity:

Looks like we missed two people! In other words, in this dataset, only two people share a combination of ZIP code and date of birth.

Another way to prevent the release of private information is to release only aggregate date.

In many cases, aggregate statistics are broken down into smaller groups. For example, we might want to know the average age of people with a particular education level.

Aggregation is supposed to improve privacy because it’s hard to identify the contribution of a particular individual to the aggregate statistic. But what if we aggregate over a group with just one person in it? In that case, the aggregate statistic reveals one person’s age exactly, and provides no privacy protection at all! In our dataset, most individuals have a unique ZIP code - so if we compute the average age by ZIP code, then most of the “averages” actually reveal an individual’s exact age.

The US Census Bureau, for example, releases aggregate statistics at the block level. Some census blocks have large populations, but some have a population of zero! The situation above, where small groups prevent aggregation from hiding information about individuals, turns out to be quite common.

How big a group is “big enough” for aggregate statistics to help? It’s hard to say - it depends on the data and on the attack - so it’s challenging to build confidence that aggregate statistics are really privacy-preserving. However, even very large groups do not make aggregation completely robust against attacks, as we will see next.

The problems with aggregation get even worse when you release multiple aggregate statistics over the same data. For example, consider the following two summation queries over large groups in our dataset (the first over the whole dataset, and the second over all records except one):

If we know both answers, we can simply take the difference and determine Karrie’s age completely! This kind of attack can proceed even if the aggregate statistics are over very large groups.

This is a recurring theme.