So far, we have seen only one measure of sensitivity: global sensitivity. Our definition for global sensitivity considers any two neighboring datasets. This seems pessimistic, since we’re going to run our differentially private mechanisms on an actual dataset - shouldn’t we consider neighbors of that dataset?

Local Sensitivity of the Mean¶

Why do we do it this way? Because the amount the output of a mean query might change when a row is added to or removed from the dataset depends on the size of the dataset. If we want to bound the global sensitivity of a mean query, we have to assume the worst: a dataset of size 1. In this case, if the data attribute values lie between upper and lower bounds \(u\) and \(l\), the global sensitivity of the mean is just \(\lvert u - l \lvert\). For large datasets, this is extremely pessimistic, and the “noisy sum over noisy count” approach is much better.

The situation is different for local sensitivity. In the worst case, we can add a new row to the dataset which contains the maximum value (\(u\)). Let \(n = \lvert x \rvert\) (i.e. the size of the dataset). We start with the value of the mean:

Now we consider what happens when we add a row:

This local sensitivity measure is defined in terms of the actual dataset’s size, which is not possible under global sensitivity.

We have defined an alternative measure of sensitivity - but how do we use it? Can we just use the Laplace mechanism, in the same way as we did with global sensitivity? Does the following definition of \(F\) satisfy \(\epsilon\)-differential privacy?

Several approaches have been proposed for safely using local sensitivity. We’ll explore these in the rest of this section.

With auxiliary data, this can tell us something really sensitive. What if our query is: “Average score of people named Joe in the dataset with a 98% on the exam”? Then the size of the thing being averaged is sensitive!!

Now we’re ready to define a query to answer the question: “how many steps are needed to achieve a local sensitivity greater than a given upper bound \(b\)?”

Notice that \(D(f,x,b)\) has a global sensitivity of 1: adding or removing a row in \(x\) might change the distance to a “high” local sensitivity by 1. Thus, adding Laplace noise scaled to \(\frac{1}{\epsilon}\) yields a differentially private way to measure local sensitivity.

Also note that the privacy cost of the framework is \((\epsilon, \delta)\) even if it returns \(\bot\) (i.e. the privacy budget is consumed whether or not the analyst receives an answer).

Let’s implement propose-test-release for our mean query. Recall that the local sensitivity for this query is \(\big\lvert \frac{u}{n+1}\big\rvert\); the best way to increase this value is to make \(n\) smaller. If we take \(k\) steps from the dataset \(x\), we can arrive at a local sensitivity of \(\big\lvert \frac{u}{(n-k)+1}\big\rvert\). We can implement the framework in Python using the following code.

Keep in mind that local sensitivity isn’t always better. For mean queries, our old strategy of splitting the query into two separate queries (a sum and a count), both with bounded global sensitivity, often works much better. We can implement the same mean query with global sensitivity: 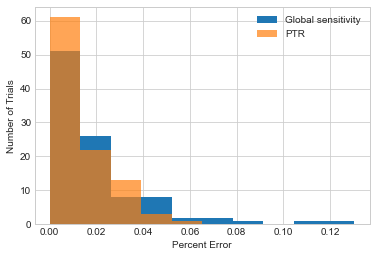 We might do slightly better with propose-test-release, but it’s not a huge difference. Moreover, to use propose-test-release, the analyst has to propose a bound on sensitivity - and we’ve cheated by “magically” picking a decent value (0.005). In practice, the analyst would need to perform several queries to explore which values work - which will consume additional privacy budget.

As an example, let’s consider the smooth sensitivity of the mean query we defined earlier. 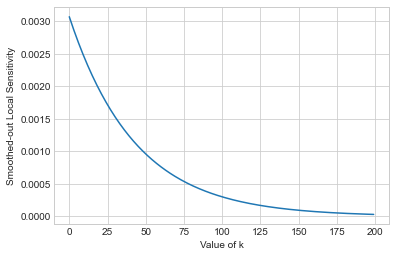 There are two things to notice here. First, even though we consider only values of \(k\) less than 200, it’s pretty clear that the smoothed-out local sensitivity of our mean query approaches 0 as \(k\) grows. In fact, for this case, the maximum occurs at \(k=0\). This is true in many cases, but if we want to use smooth sensitivity, we have to prove it (which we won’t do here). Second, notice that the final sensitivity we’ll use for adding noise to the query’s answer is higher than the sensitivity we proposed earlier (under propose-test-release). It’s not a big difference, but it shows that it’s sometimes possible to achieve a lower sensitivity with propose-test-release than with smooth sensitivity.

We’ll consider one last framework related to local sensitivity, called sample and aggregate (also due to Nissim, Raskhodnikova, and Smith [8]). For any function \(f : D \rightarrow \mathbb{R}\) and upper and lower clipping bounds \(u\) and \(l\), the following framework satisfies \(\epsilon\)-differential privacy:

In this simple instantiation of the sample and aggregate framework, we ask the analyst to provide the upper and lower bounds \(u\) and \(l\) on the output of each \(f(x_i)\). Depending on the definition of \(f\), this might be extremely difficult to do well. In a counting query, for example, \(f\)’s output will depend directly on the dataset.

More advanced instantiations have been proposed (Nissim, Raskhodnikova, and Smith discuss some of these) which leverage local sensitivity to avoid asking the analyst for \(u\) and \(l\). For some functions, however, bounding \(f\)’s output is easy - so this framework suffices. We’ll consider our example from above - the mean of ages within a dataset - with this property. The mean age of a population is highly likely to fall between 20 and 80, so it’s reasonable to set \(l=20\) and \(u=80\). As long as our chunks \(x_i\) are each representative of the population, we’re not likely to lose much information with this setting.

The key parameter in this framework is the number of chunks, \(k\). As \(k\) goes up, the sensitivity of the final noisy mean goes down - so more chunks means less noise. On the other hand, as \(k\) goes up, each chunk gets smaller, so each answer \(f(x_i)\) is less likely to be close to the “true” answer \(f(X)\). In our example above, we’d like the average age within each chunk to be close to the average age of the whole dataset - and this is less likely to happen if each chunk contains only a handful of people. 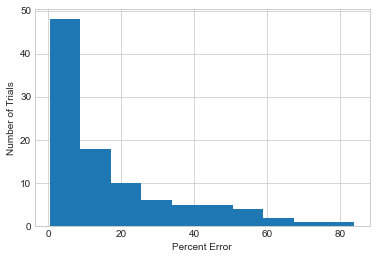 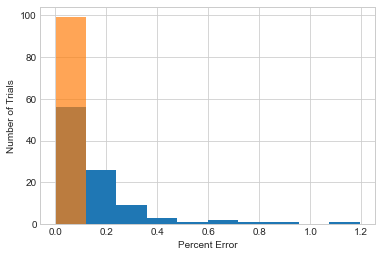 So - sample and aggregate isn’t able to beat our global sensitivity-based approach, but it can get pretty close if you choose the right value for \(k\). The big advantage is that sample and aggregate works for any function \(f\), regardless of its sensitivity; if \(f\) is well-behaved, then it’s possible to obtain good accuracy from the framework. On the other hand, using sample and aggregate requires the analyst to set the clipping bounds \(u\) and \(l\), and the number of chunks \(k\).