Recall that most of the bounds on privacy cost we have shown are upper bounds, but they sometimes represent very loose upper bounds - the true privacy cost is much less than the upper bound says. The primary motivation in developing new variants of differential privacy is to enable tighter bounds on privacy cost - especially for iterative algorithms - while maintaining privacy definitions which are useful in practice. For example, the catastrophic failure mode of \((\epsilon, \delta)\)-differential privacy is not desirable; the variants we’ll see in this section enable even tighter composition for some kinds of queries, while at the same time eliminating the catastrophic failure mode.

A neat way to visualize this is to look at what happens to privacy cost when we “vectorize” a query: that is, we merge lots of queries into a single query which returns a vector of the individual answers. Because the answer is a vector, we can use the vector-valued Laplace mechanism just once, and avoid composition altogether. Below, we’ll graph how much noise is needed for \(k\) queries, first under sequential composition, and then using the “vectorized” form. In the sequential composition case, each query has a sensitivity of 1, so the scale of the noise for each one is \(\frac{1}{\epsilon_i}\). If we want a total privacy cost of \(\epsilon\), then the \(\epsilon_i\)s must add up to \(\epsilon\), so \(\epsilon_i = \frac{\epsilon}{k}\). This means that each query gets Laplace noise with scale \(\frac{k}{\epsilon}\). In the “vectorized” case, there’s just one query, but it has an L1 sensitivity of \(\sum_{i=1}^k 1 = k\), so the scale of the noise is \(\frac{k}{\epsilon}\) in this case too. 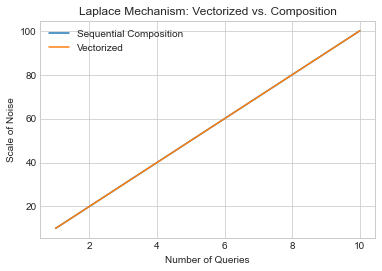 What does this difference mean in practice? The two behave the same asymptotically in \(k\), but have different constants, and the advanced composition case has an additional logarithmic factor in \(\delta\). All this adds up to a much looser bound in the case of advanced composition. Let’s graph the two as we did before. 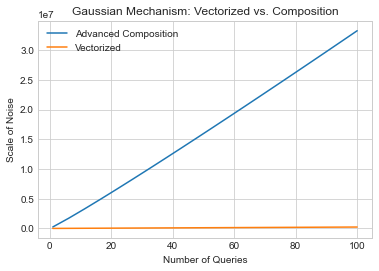 It’s not even close - the “vectorized” version grows much slower. What does this mean? We should be able to do much better for sequential composition!

An interesting direction for research in differential privacy is the exploration of alternative privacy definitions in terms of other divergences. Of these, the Rényi divergence is particularly interesting, since it also (like max divergence) allows us to recover the original definition of differential privacy. The Rényi divergence of order \(\alpha\) between probability distributions \(P\) and \(Q\) is defined as (where \(P(x)\) denotes the probability density of \(P\) at point \(x\)):

We can implement the Gaussian mechanism for Rényi differential privacy as follows:

Based on this sequential composition theorem, running an \((\alpha, \bar{\epsilon})\)-RDP mechanism \(k\) times results in \((\alpha, k\bar{\epsilon})\)-RDP. For a given level of noise (i.e. a given value for \(\sigma^2\)), bounding the privacy cost of repeated applications of the Gaussian mechanism using RDP’s sequential composition, and then converting to \((\epsilon, \delta)\)-differential privacy, will usually yield a much lower privacy cost than performing the composition directly in \((\epsilon, \delta)\) world (even with advanced composition).

As a result, the ideas behind Rényi differential privacy have been used to greatly improve the privacy cost accounting in a number of recent iterative algorithms, including Google’s differentially private version of Tensorflow.

In concurrent work released in 2016, Mark Bun and Thomas Steinke proposed zero-concentrated differential privacy (zCDP) [11]. Like RDP, zCDP is defined in terms of the Rényi divergence, but it includes only a single privacy parameter (\(\rho\)). A randomized mechanism \(F\) satisfies \(\rho\)-zCDP if for all neighboring datasets \(x\) and \(x'\), and all \(\alpha \in (1, \infty)\):

zCDP is also similar to RDP in that the Gaussian mechanism can be used as a basic mechanism. Specifically, for a function \(f : \mathcal{D} \rightarrow \mathbb{R}^k\) with \(L2\) sensitivity \(\Delta f\), the following mechanism satisfies \(\rho\)-zCDP:

As with RDP, this mechanism is easy to implement:

In another similarity with RDP, zCDP’s sequential composition is also asymptotically tight for repeated applications of the Gaussian mechanism. It’s also very simple: the \(\rho\)s add up. Specifically:

Composition under Variants of Differential Privacy¶

Which variant should we use, and when?

The recently-developed variants will yield significantly tighter bounds on privacy cost when:

To use RDP and zCDP, we typically implement an algorithm in terms of the variant we want to use, and then convert the total privacy cost of running the algorithm back to \((\epsilon, \delta)\)-differential privacy so that we can compare it to other algorithms.

To see the effect of this strategy, let’s imagine an algorithm that applies the Gaussian mechanism \(k\) times. We’ll fix values for \(\sigma\) (i.e. the amount of noise added with the Gaussian mechanism in each of the \(k\) iterations) and \(\delta\), and then compare the final \(\epsilon\)s achieved for each variant.

The first thing to note is that using sequential composition under either zCDP or RDP is much better than using advanced composition with \((\epsilon, \delta)\)-differential privacy. When building iterative algorithms with the Gaussian mechanism, these variants should always be used.

The practial effect of this difference is that \(\alpha\) must be chosen carefully when using RDP in order to bound privacy cost as tightly as possible. This is usually easy to do, since algorithms are usually parameterized by \(\alpha\); as a result, we can simply test multiple values of \(\alpha\) to see which one results in the smallest corresponding \(\epsilon\). Since this test is independent of the data (it depends mainly on the privacy parameters we pick, and the number of iterations we want to run), we can test as many values of \(\alpha\) as we want without paying additional privacy cost. We only need to test a small range of values for \(\alpha\) - typically in the range between 2 and 100 - to find a minimum. This is the approach taken in most practical implementations, including Google’s privacy-preserving version of Tensorflow.