We’ve already seen one example of a mechanism - the exponential mechanism - which achieves a lower-than-expected privacy cost by withholding some information. Are there others?

There are, and one that turns out to be extremely useful in practical algorithms is the sparse vector technique (SVT) [14]. The sparse vector technique operates on a stream of sensitivity-1 queries over a dataset; it releases the identity of the first query in the stream which passes a test, and nothing else. The advantage of SVT is that it incurs a fixed total privacy cost, no matter how many queries it considers.

The most basic instantiation of the sparse vector technique is an algorithm called AboveThreshold (see Dwork and Roth [13], Algorithm 1). The inputs to the algorithm are a stream of sensitivity-1 queries, a dataset \(D\), a threshold \(T\), and the privacy parameter \(\epsilon\); the algorithm preserves \(\epsilon\)-differential privacy. A Python implementation of the algorithm appears below.

It’s a little bit surprising that the privacy cost of this algorithm is just \(\epsilon\), because it may compute the answers to many queries. In particular, a naive version of this algorithm might compute noisy answers to all of the queries first, then select the index of the first one whose value is above the threshold:

Why does AboveThreshold do so much better? As we saw with the exponential mechanism, sequential composition would allow AboveThreshold to release more information than it actually does. In particular, our naive version of the algorithm could release the indices of every query exceeding the threshold (not just the first one), plus the noisy query answers themselves, and it would still preserve \(n\epsilon\)-differential privacy. The fact that AboveThreshold withholds all this information allows for a tighter analysis of privacy cost.

The sparse vector technique is extremely useful when we want to run many different queries, but we only care about the answer for one of them (or a small subset of them). In fact, this application gives the technique its name: it’s most useful when the vector of queries is sparse - i.e. most of the answers don’t exceed the threshold.

We’ve already seen a perfect example of such a scenario: selecting a clipping bound for summation queries. Earlier, we took an approach like the naive version of AboveThreshold defined above: compute noisy answers under many different clipping bounds, then select the lowest one for which the answer doesn’t change much.

We can do much better with the sparse vector technique. Consider a query which clips the ages of everyone in the dataset, then sums them up:

The naive algorithm for selecting a good value for b is to obtain differentially private answers for many values of b, returning the smallest one where the value stops increasing: 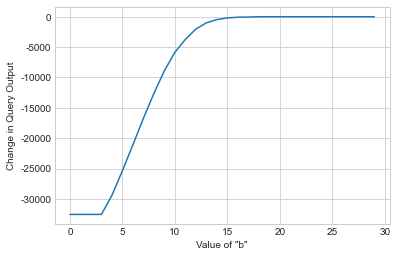 Let’s define a stream of difference queries, and use AboveThreshold to determine the index of the best value of b using the sparse vector technique.

Note that it doesn’t matter how long the list bs is - we’ll get accurate results (and pay the same privacy cost) no matter its length. The really powerful effect of SVT is to eliminate the dependence of privacy cost on the number of queries we perform. Try changing the range for bs above and re-running the plot below. You’ll see that the output doesn’t depend on the number of values for b we try - even if the list has thousands of elements! 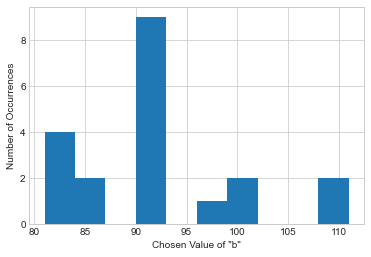 We can use SVT to build an algorithm for summation queries (and using this, for average queries) that automatically computes the clipping parameter.

This algorithm invokes three differentially private mechanisms: AboveThreshold once, and the Laplace mechanism twice, each with \(\frac{1}{3}\) of the privacy budget. By sequential composition, it satisfies \(\epsilon\)-differential privacy. Because we are free to test a really wide range of possible values for b, we’re able to use the same auto_avg function for data on many different scales! For example, we can also use it on the capital gain column, even though it has a very different scale than the age column.

Note that this takes a long time to run! That’s because we have to try a lot more values for b before finding a good one, since the capital gain column has a much larger scale. We can reduce this cost by increasing the step size (5, in our implementation above) or by constructing bs with an exponential scale.

In the above application, we only needed the index of the first query which exceeded the threshold, but in many other applications we would like to find the indices of all such queries.

We can use SVT to do this, but we’ll have to pay a higher privacy cost. We can implement an algorithm called sparse (see Dwork and Roth [13], Algorithm 2) to accomplish the task, using a very simple approach:

If the algorithm invokes AboveThreshold \(n\) times, with a privacy parameter of \(\epsilon\) for each invocation, then it satisfies \(n\epsilon\)-differential privacy by sequential composition. If we want to specify an upper bound on total privacy cost, we need to bound \(n\) - so the sparse algorithm asks the analyst to specify an upper bound \(c\) on the number of times AboveThreshold will be invoked.

A range query asks: “how many rows exist in the dataset whose values lie in the range \((a, b)\)?” Range queries are counting queries, so they have sensitivity 1; we can’t use parallel composition on a set of range queries, however, since the rows they examine might overlap.

Consider a set of range queries over ages (i.e. queries of the form “how many people have ages between \(a\) and \(b\)?”). We can generate many such queries at random:

The answers to such range queries vary widely - some ranges create tiny (or even empty) groups, with small counts, while others create large groups with high counts. In many cases, we know that the small groups will have inaccurate answers under differential privacy, so there’s not much point in even running the query. What we’d like to do is learn which queries are worth answering, and then pay privacy cost for just those queries.

We can use the sparse vector technique to do this. First, we’ll determine the indices of the range queries in the stream which exceed a threshold for “goodness” that we decide on. Then, we’ll use the Laplace mechanism to find differentially private answers for just those queries. The total privacy cost will be proportional to the number of queries above the threshold - not the total number of queries. In cases where we expect just a few queries to be above the threshold, this can result in a much smaller privacy cost.

Using this algorithm, we pay half of the privacy budget to determine the first \(c\) queries which lie above the threshold of 10000, then the other half of the budget to obtain noisy answers to just those queries. If the number of queries exceeding the threshold is tiny compared to the total number, then we’re able to obtain much more accurate answers using this approach.