This definition should seem a little bit scary! With probability \(\delta\), anything at all could happen - including a release of the entire sensitive dataset! For this reason, we typically require \(\delta\) to be very small - usually \(\frac{1}{n^2}\) or less, where \(n\) is the size of the dataset. In addition, we’ll see that the \((\epsilon, \delta)\)-differentially private mechanisms in practical use don’t fail catastrophically, as allowed by the definition - instead, they fail gracefully, and don’t do terrible things like releasing the entire dataset.

Such mechanisms are possible, however, and they do satisfy the definition of \((\epsilon, \delta)\)-differential privacy. We’ll see an example of such a mechanism later in this section.

The only difference from the pure \(\epsilon\) setting is that we add up the \(\delta\)s as well as the \(\epsilon\)s. Approximate differential privacy also satisfies post-processing and parallel composition.

where \(s\) is the sensitivity of \(f\), and \(\mathcal{N}(\sigma^2)\) denotes sampling from the Gaussian (normal) distribution with center 0 and variance \(\sigma^2\). Note that here (and elsewhere in these notes), \(\log\) denotes the natural logarithm.

For real-valued functions \(f : D \rightarrow \mathbb{R}\), we can use the Gaussian mechanism in exactly the same way as we do the Laplace mechanism, and it’s easy to compare what happens under both mechanisms for a given value of \(\epsilon\). 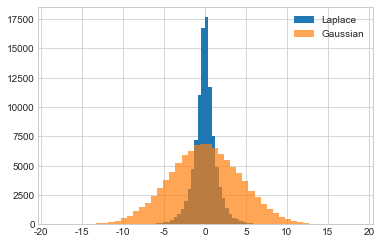 So the Gaussian mechanism has two major drawbacks - it requires the use of the the relaxed \((\epsilon, \delta)\)-differential privacy definition, and it’s less accurate than the Laplace mechanism. Why would we want to use it?

Vector-Valued Functions and their Sensitivities#

We saw earlier that the sensitivity of a function is:

How do we define sensitivity for vector-valued functions?

The magnitude of this vector is the sensitivity of \(f\). There are several ways to compute the magnitude of a vector; we’ll use two of them: the \(L1\) norm and the \(L2\) norm.

This is equal to the sum of the elementwise sensitivities. For example, if we define a vector-valued function \(f\) that returns a length-\(k\) vector of 1-sensitive results, then the \(L1\) sensitivity of \(f\) is \(k\).

Similarly, the \(L2\) sensitivity of a vector-valued function \(f\) is:

Choosing Between L1 and L2#

Consider the following mechanism, which we will call the catastrophe mechanism:

In this example, the sequence of mechanisms is fixed ahead of time (we use the same mechanism each time), and \(k = 500\).

The standard sequential composition theorem says that the total privacy cost of this mechanism is \(k\epsilon\) (in this case, \(500 \epsilon\)).

It’s important to note that the two bounds are technically incomparable, since advanced composition introduces a \(\delta\). When \(\delta\) is small, however, we will often compare the \(\epsilon\)s given by both methods. 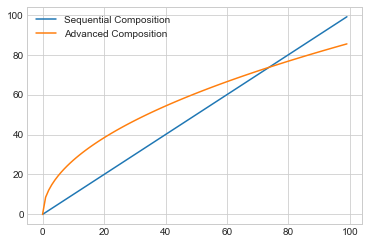 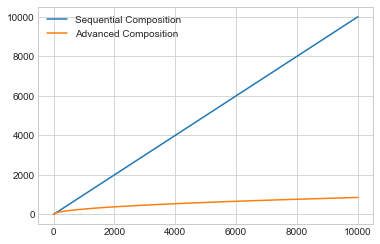 The only difference is in the failure parameter \(\delta\) for the composed mechanism, where we have an additional \(k\delta\) term. When the mechanisms being composed satisfy pure \(\epsilon\)-differential privacy, then \(\delta = k\delta = 0\), and we get the same result as the statement above.