The principle that the \(\epsilon\)s “add up” makes sense if we examine the distribution of outputs from a mechanism which averages two differentially private results together. Let’s look at some examples.

If we graph F1 and F2, we see that the distributions of their outputs look pretty similar. 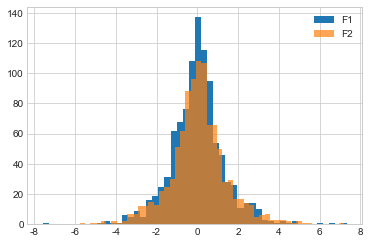 If we graph F1 and F3, we see that the distribution of outputs from F3 looks “pointier” than that of F1, because its higher \(\epsilon\) implies less privacy, and therefore a smaller likelihood of getting results far from the true answer. 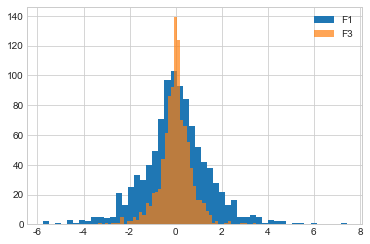 If we graph F1 and F_combined, we see that the distribution of outputs from F_combined is pointier. This means its answers are more accurate than those of F1, so it makes sense that its \(\epsilon\) must be higher (i.e. it yields less privacy than F1). 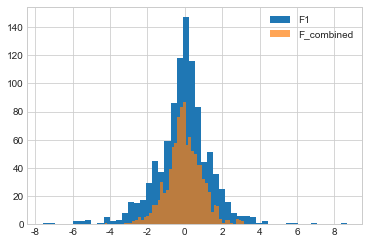 What about F3 and F_combined? Recall that the \(\epsilon\) values for these two mechanisms are the same - both have an \(\epsilon\) of 2. Their output distributions should look the same. 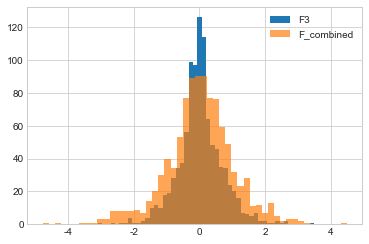 The formal definition matches up with our intuition - if each participant in the dataset contributes one row to \(X\), then this row will appear in exactly one of the chunks \(x_1, ..., x_k\). That means \(F\) will only “see” this participant’s data one time, meaning a privacy cost of \(\epsilon\) is appropriate for that individual. Since this property holds for all individuals, the privacy cost is \(\epsilon\) for everyone.

Histograms are particularly interesting for differential privacy because they automatically satisfy parallel composition. Each “bin” in a histogram is defined by a possible value for a data attribute (for example, 'Education' == 'HS-grad'). It’s impossible for a single row to have two values for an attribute simultaneously, so defining the bins this way guarantees that they will be disjoint. Thus we have satisfied the requirements for parallel composition, and we can use a differentially private mechanism to release all of the bin counts with a total privacy cost of just \(\epsilon\).

A contingency table or cross tabulation (often shortened to crosstab) is like a multi-dimensional histogram. It counts the frequency of rows in the dataset with particular values for more than one attribute at a time. Contingency tables are frequently used to show the relationship between two variables when analyzing data. For example, we might want to see counts based on both education level and gender:

Like the histogram we saw earlier, each individual in the dataset participates in exactly one count appearing in this table. It’s impossible for any single row to have multiple values simultaneously, for any set of data attributes considered in building the contingency table. As a result, it’s safe to use parallel composition here, too.

It’s also possible to generate contingency tables of more than 2 variables. Consider what happens each time we add a variable, though: each of the counts tends to get smaller. Intuitively, as we split the dataset into more chunks, each chunk has fewer rows in it, so all of the counts get smaller.

These shrinking counts can have a significant affect on the accuracy of the differentially private results we calculate from them. If we think of things in terms of signal and noise, a large count represents a strong signal - it’s unlikely to be disrupted too much by relatively weak noise (like the noise we add above), and therefore the results are likely to be useful even after the noise is added. However, a small count represents a weak signal - potentially as weak as the noise itself - and after we add the noise, we won’t be able to infer anything useful from the results.

So while it may seem that parallel composition gives us something “for free” (more results for the same privacy cost), that’s not really the case. Parallel composition simply moves the tradeoff between accuracy and privacy along a different axis - as we split the dataset into more chunks and release more results, each result contains a weaker signal, and so it’s less accurate.

The post-processing property means that it’s always safe to perform arbitrary computations on the output of a differentially private mechanism - there’s no danger of reversing the privacy protection the mechanism has provided. In particular, it’s fine to perform post-processing that might reduce the noise or improve the signal in the mechanism’s output (e.g. replacing negative results with zeros, for queries that shouldn’t return negative results). In fact, many sophisticated differentially private algorithms make use of post-processing to reduce noise and improve the accuracy of their results.