After reading this chapter, you will understand:

Informally, we say that a dataset is “\(k\)-Anonymized” for a particular \(k\) if each individual in the dataset is a member of a group of size at least \(k\), such that each member of the group shares the same quasi-identifiers (a selected subset of all the dataset’s columns) with all other members of the group. Thus, the individuals in each group “blend into” their group - it’s possible to narrow down an individual to membership in a particular group, but not to determine which group member is the target.

To implement a function to check whether a dataframe satisfies \(k\)-Anonymity, we loop over the rows; for each row, we query the dataframe to see how many rows match its values for the quasi-identifiers. If the number of rows in any group is less than \(k\), the dataframe does not satisfy \(k\)-Anonymity for that value of \(k\), and we return False. Note that in this simple definition, we consider all columns to contain quasi-identifiers; to limit our check to a subset of all columns, we would need to replace the df.columns expression with something else.

The process of modifying a dataset so that it satisfies \(k\)-Anonymity for a desired \(k\) is generally accomplished by generalizing the data - modifying values to be less specific, and therefore more likely to match the values of other individuals in the dataset. For example, an age which is accurate to a year may be generalized by rounding to the nearest 10 years, or a ZIP code might have its rightmost digits replaced by zeros. For numeric values, this is easy to implement. We’ll use the apply method of dataframes, and pass in a dictionary named depths which specifies how many digits to replace by zeros for each column. This gives us the flexibility to experiment with different levels of generalization for different columns.

Now, we can generalize our example dataframe. First, we’ll try generalizing each column by one “level” - i.e. rounding to the nearest 10.

Notice that even after generalization, our example data still does not satisfy \(k\)-Anonymity for \(k=2\).

We can try generalizing more - but then we’ll end up removing all of the data!

This example illustrates one of the key challenges of achieving \(k\)-Anonymity:

Let’s try the same census data we examined for de-identification. This dataset contains more than 32,000 rows, so it should be easier to achieve \(k\)-Anonymity.

We’ll consider the ZIP code, age, and educational achievement of each individual to be the quasi-identifiers. We’ll project just those columns, and try to achieve \(k\)-Anonymity for \(k=2\). The data is already \(k\)-Anonymous for \(k=1\).

Notice that we take just the first 100 rows from the dataset for this check - try running isKAnonymized on a larger subset of the data, and you’ll find that it takes a very long time (for example, running the \(k=1\) check on 5000 rows takes about 20 seconds on my laptop). For \(k=2\), our algorithm finds a failing row quickly and finishes fast.

Now, we’ll try to generalize to achieve \(k\)-Anonymity for \(k=2\). We’ll start with generalizing both age and educational attainment to the nearest 10.

The reason is that the dataset contains outliers - individuals who are very different from the rest of the population. These individuals do not fit easily into any group, even after generalization. Even considering only ages, we can see that adding more data is not likely to help, since very low and very high ages are poorly represented in the dataset. 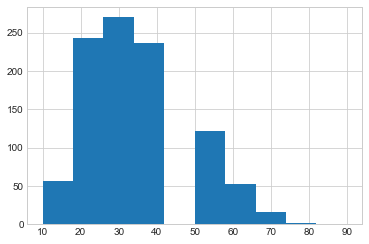 Achieving the optimal generalization for \(k\)-Anonymity is very challenging in cases like this. Generalizing each row more would be overkill for the well-represented individuals with ages in the 20-40 range, and would hurt utility. However, more generalization is clearly needed for individuals at the upper and lower ends of the age range. This is the kind of challenge that occurs regularly in practice, and is difficult to solve automatically. In fact, optimal generalization for \(k\)-Anonymity has been shown to be NP-hard.

One solution to this problem is simply to clip the age of each individual in the dataset to lie within a specific range, eliminating outliers entirely. This can also hurt utility, since it replaces real ages with fake ones, but it can be better than generalizing each row more. We can use Numpy’s clip method to perform this clipping. We clip ages to be 60 or below, and leave educational levels alone (by clipping them to a very large value).

Now, the generalized dataset satisfies \(k\)-Anonymity for \(k=7\)! In other words, our level of generalization was appropriate, but outliers prevented us from achieving \(k\)-Anonymity before, even for \(k=2\).